The route on day 52 undulated up and down all day.  It is my sixth day of riding and I can tell my quads have not fully recovered.  The hills were not big but they were steep enough to take high gear out of play most of the day.

Come on get up and get gong the down hill is not that steep.

I met another young couple riding from Florida,  They left just 5 days after I did and since we met at just about the halfway point they are traveling almost the same pace I am.  Then a whole gaggle of cyclists rode by the other way from Blanco.  They were on a short supported tour.

There was not much to do so my crew leapfrogged most of the day.  Knucklehead quit giving me directions so I knew I would have to rely strictly on the map when I got to route changes in Blanco.  The last few miles to Blanco flattened out and the road was a smaller smoother chip and tar.  It felt so good to kick the KH into high gear I felt like I was flying compared to the rest of the day.

My crew past me just as we came into town and turned right so I followed suit.  At the first stop Joan stopped to wait for me to catch up.  We consulted the GPS in car and were getting confusing directions.  Visually I could see the route on he GPS map in the car showed the way so I said I would follow her.  Joan rolled up to the stop and said she wasn’t sure which way to go .  She turned right and I turned left.

As I was rolling through town she came back after me but her GPS said to turn left even though it was showing the route to the right.  We came to another intersection and she turned left according to the GPS  and I turned right.  A mile later I was headed out of town and changed routes again.  I knew my crew would find me sooner or later, she always does.  In a short time she rolled by and I signaled I need two more tenths of a mile to make 30.  We called it a day.  We stopped for more ice cream because everyone still thinks I am losing weight. 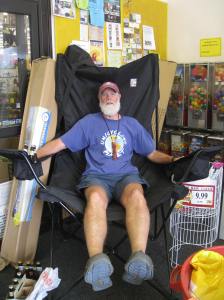 Everyone still thinks I am losing weight. I don’t understand why.

My sister Katie and her husband Terry were flying in to meet us in Kyle and spend a couple of days.  I planned to take two days off but due to a pesky sore on my leg unrelated to riding I may have to take another day off.

This entry was posted in Uncategorized. Bookmark the permalink.