Day 49 came with a cool north wind 10 to 20’s with gusts to 35.  My route took me northeast on 337.  Today I encountered some of the toughest hills of the trip so far.  They weren’t so long but a bit steeper than most of the ones in New Mexico.  The worst part about them was the wind.

Descending first climb of on 337. This looks like it could be fun on a bicycle

The road wound up and down the hills in every direction giving the compass fits.  More than once I was blasted so hard I almost stopped dead while trying to climb.  I stood on the  pedals with all my weight and wished I had eaten a heavy breakfast. 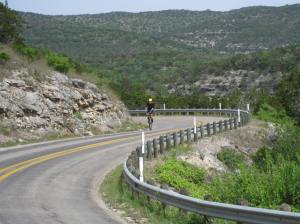 Ascending the second hill on 337

Ascending the 3rd hill on 337 with the schlumpf 29

Pulling into Leakey a young couple rode up who are riding the same route but left around March 22nd.  We had just come over our first climb of the day and the one rider said he had been run off the road while descending.  I’m not sure if it was the same vehicle but I had a white hatchback of some kind come as close as he could to me and I was riding on the shoulder.  They said they had some local advise that an alternative route up to route 39 was less hilly.  I was temped to follow, but without knowing the source I opted to stay on route.

The two climbs I did after we parted were challenging and I have one more to go.  If I can make it through tomorrow I should be through the toughest hills of the trip.  I didn’t feel as wiped out as I do on some days but my legs are just dead.  Holding myself back on some of the descents was almost as hard as the ascents.  According to my cycle meter some of the grades were 14%

This entry was posted in Uncategorized. Bookmark the permalink.