On Thursday Feb 24th Joan and I flew into San Jose Costa Rica.  Our first taste of the local culture was the amusement park ride they call a taxi.  Immediately we became aware that Ticos are much better drivers than Gringos.  They are able to negotiate narrow streets with bumper to bumper traffic at alarming speeds while dodging darting pedestrians.  Motor cycles are everywhere including between lanes.  They turned a four lane highway into a seven lane highway.

We stayed two nights at the Don Carlos Hotel in San Jose while waiting for our outfitter Costa Rica Rios to pick us up.  The  outside of many of the buildings did not impress me, but the interiors were often very ornate. 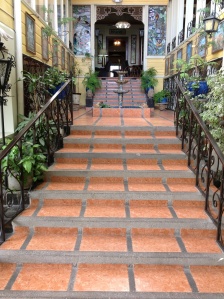 We had plenty of time to look for a 12 pack to put on ice while we waited for Bill, Maryl, Karen, John and Diane to join us. 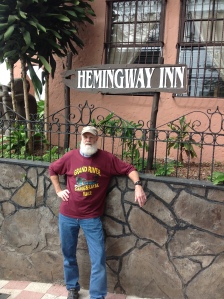 Hemingway outside of his place in San Jose

On Saturday Jan 26th Costa Rica Rios picked us up in a bus and one beer stop and one pee stop later we were in Turrialba where we stayed at a B&B and met the rest of our group.

Sunday morning we selected our river crafts.  I decided to test paddle a Dagger Nomad which is considerably different than my piranha H3.

We paddled an easy section of Pejibaye.  In addition to our guides we were 15 paddlers consisting of 8 kayaks 3 open canoes and four duckies.  Four of the kayakers were from Quebec. I tried to explain their roles as probes but something must have been lost in translation, because they always seemed to let me go before them. 🙂  After lunch on the river we shuttled above our original put in and ran the section again.  Everyone stroked well.

Monday we paddled a section of the Sarapiqui.  It was a little more challenging where the river was inclined to run into the side of the bank before making a turn.  On such rapid caught me bird watching and I promptly flipped and swam after two feeble roll attempts.  I believe it had been a few years since I swam.  I always knew bird watching could be hazardous.

Tuesday we put in above our original put in on the Sarapiqui to pickup a couple of more rapids and give me an other shot at the rapid that foiled me the day before.  Shortly we came to a rapid unlike any we had run so far.  The river necked down and poured over and around some large boulders.  It made me nervous that we got out to scout.  The approach was easy enough but the drop finished in boofing off a pour over rock.  The kayakers consulted with each other trying to get reassurance that we should run it.  I believe one portaged and one swam.  The rest of the group were in a raft or shredder.

Wednesday we walked down a long dirt road to put in on the Pacuare.  Our boats were shuttled down.  Even though the rapids were more difficult the walk was the hardest part of the day.  We took out at a Jungle camp on the side of the river, were we spent the next two nights

Jungle camp on the Pacuare River

The guides manage to add some excitement to the night by dispatching with a Fer De Lance in camp.  A two meter pit viper.

This is a picture of the venomous Fer De Lance. Not the one from camp

Thursday was a day of rest for some and a day of terror for me.  About half our group opted to take a canopy tour.  Everyone said it was beautiful.  I took their word for it because all I could see was the inside of my eyelids.

One of three rappels in the canopy tour. 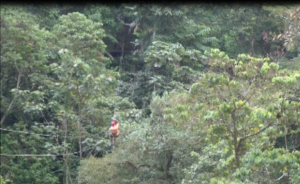 The Last and longest zip line of the canopy tour. I estimated it to be 300 meters long

Thursday night the outfitter gave a talk about the challenges facing us on the next section of the Pacuare we would run on Friday.  Consequently I was the only Kayaker left on Friday morning.  Everyone else was in a raft except my buddy Bill who ran in the back of the group on a cataraft.  I was able to follow my guide Walter who ran very good lines for me the hole day.  The boys from Quebec finally ran prob but they were in a raft.

Running through a hole on the Sarapiqui

Surfing on the Sarapiqui

Boof on the Sarapiqui

Second day on the Pacuare

The boat made a mistake I had to correct

Drop on the Pacuare

I survived the Pacuare getting my head wet twice but keeping my feet dry.  Big bubbles no troubles 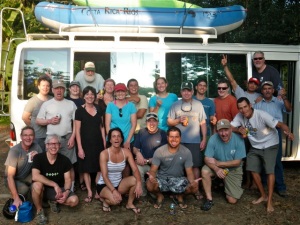 The entire group on the Costa Ric Rios expedition

On to phase two of the Costa Rica experience.  Bill and Joan and I took a van to Puerto Viejo on the South end of the Caribbean  side of Costa Rica.

We stayed in the Casa Mamba at Finca Local Natural.  We hung out on the beach, drank some cervezas eat, listened to Carter’s band (owner of Loco Natural) and watched the Superbowl in Spanish projected on a sheet at the Lazy Mon bar.  At the beginning everyone picked a team and the rest of the night you got a free shot if your team scored.  My hope was that the team I picked would win with nothing but field goals.  Both teams scored so much I don’t remember who won.

Breaking surf on the point of Manzanillo National Park

Everything is larger than life in the rain forest. The leaves on this plant dwarf my 2500 ccm backpack.

Carter and his band playing at the Lazy Mon.

Banana Spiders were everywhere. Much bigger than the any spiders in Ohio

Some sort of Green lizard we saw in Cahuita National Park. It was nearly a foot long.

Casa Mamba. The house we stayed at in Puerta Viejo

The three stooges at Casa Mamba

Looking out the open living room of Casa Mamba

This entry was posted in Uncategorized and tagged Costa Rica, Kayak, White Water. Bookmark the permalink.